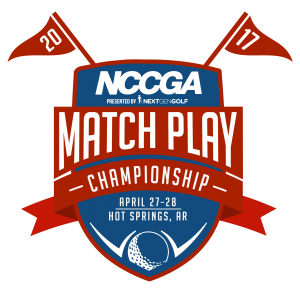 Nextgengolf is excited to present the 2016 Match Play Challenge this September exclusively for NCCGA club golf teams! Four (4) tournaments will be hosted in various locations across the country. Each tournament will pit teams representing their NCCGA region against one another. The teams will compete in 36-holes of head-to-head match play over 2-days to determine a champion.

Note: These tournaments are completely separate from NCCGA regional events, and will have no bearing on nationals qualifying or regional standings.

What is the format?

Each tournament will pit four teams of up to 12 players against each other in a bracket match play competition. Day 1 will have Team A v. Team B, and Team C v. Team D. Day 2 will then have the winner of A/B v. the winner of C/D.

Each match will pit the team's corresponding seeds against each other. Each group will consist of 2 players from each team. For example, Team A's 1 and 2 players in the same group as Team B's 1 and 2 player each playing their separate seeded match

If a tournament doesn't fill up all four teams, we will move players around to form teams of equal players.

Can I register as an individual?

Yes. We have 12 open spots on each team, and any combination of players can compose the team.

Ex) 12 players on the South Region team can be made up of 2 Auburn, 4 Alabama, 5 Tennessee, and 1 Vanderbilt golfer.

What is included in the tournament costs?

How are the individual matches set up?

Each team will have up to 12 players, ranked 1 through 12.  The number 1 player from team one will play the number 1 player on team two in an individual match play 18-hole match and so on down through the 12th ranked players.

Winning an individual match gives a team 1 point, a halve wins .5 points, and a loss earns 0 points.  Seeds will be determined based on NCCGA scoring average.

Is this an NCCGA regional event?

No. These match play tournaments are completely separate from NCCGA regional tournaments. These events will not affect or have any bearing on qualifying for Nationals, or regional standings. This is an optional event for any club golfers that would like to participate.

How is the tournament seeding selected?

After registering for the tournament, all participating players will provide their average score and/or handicap. The NCCGA tournament average will also be used to determine seeding for each team.

Can players be re-seeded after round 1?

Absolutely, but all requests must be received during the scoring process after round 1 to ensure tee times can be sent to the course as soon as possible

How many players can a school bring?

A school can bring anywhere from 1-12 players to their region's match play tournament. Registration will stay open until all of the maximum 12 spots are filled.

How do I qualify for the Match Play Championship?

The Matchplay Championship is scheduled for the first week of January.  The winning team in each tournament will receive a bid.

How does this affect NCCGA Nationals qualifying?

It does not. This is a completely separate event from NCCGA regional tournaments, and has no effect on qualifying for nationals, or regional standings.

Who is eligible to play?

Any student that meets the NCCGA's eligibility requirements is eligible to play in the Fall Match Play tournaments.

No. In an effort to keep costs low, lodging is not included for the tournaments. This allows teams the freedom to choose the lodging that best fits their budget/needs. Teams and/or regions are free to book a hotel or an AirBNB if they want to lodge together.

How do we reserve our spot?

What's the tie-breaker if teams win the same number of points?

If teams earn the same amount of points through the matches, the following tie-breakers will be used in order:

This website uses cookies to improve your experience while you navigate through the website. Out of these cookies, the cookies that are categorized as necessary are stored on your browser as they are essential for the working of basic functionalities of the website. We also use third-party cookies that help us analyze and understand how you use this website. These cookies will be stored in your browser only with your consent. You also have the option to opt-out of these cookies. But opting out of some of these cookies may have an effect on your browsing experience.
Necessary Always Enabled
Necessary cookies are absolutely essential for the website to function properly. This category only includes cookies that ensures basic functionalities and security features of the website. These cookies do not store any personal information.
Non-necessary
Any cookies that may not be particularly necessary for the website to function and is used specifically to collect user personal data via analytics, ads, other embedded contents are termed as non-necessary cookies. It is mandatory to procure user consent prior to running these cookies on your website.
SAVE & ACCEPT